I admit it. I haven’t felt like this since the end of Harry Potter movie 7.2. I remember sitting in the movie theater watching the credits rolling and hoping for a hint that there was another series on the way. Anything to keep the dream alive.

But the credits ended, the lights came on and I looked at the two boys who had snuggled up to me for eight years as Harry and co. had bespelled us, binding us together in an intense family experience.

I comforted myself. At least there were the Tolkien movies: The Lord of the Rings offered three years of reprise and then, The Hobbit, that thin novella, sprouted into three movies over three years. No problem with me that most of the movie content came from other books – Tolkien purist that I consider myself. A female elf (an elfe in the Wycaan Master series): a warrior at that? Bring her on.

And now, my boys and I, one taller than me and shaving, will walk the lonely steps to the shrine of moving pictures, to pay homage one last time to the Old Professor’ world on screen. But at least we walk together, sit together, crunch popcorn together…

And I know that the lights will come on and, after six Middle Earth movies, we will stretch our limbs (some considerably longer than they were six years ago), and then what? 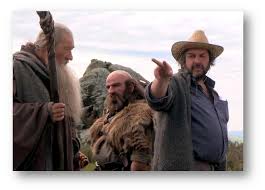 Last year I was proud when my then 15-year-old told his friends that he would not join them to see the Hobbit movie – its one he’ll see with his old man. I might not be the best father in the world, far from it I’m sure, but I figure I must have done something right.

Worse yet, in ten days I will complete the first draft of Book 6 in the Wycaan Master series. I remember writing the first novel together, a half decade ago, with two eager boys sitting around a picnic table in a redwood forest. For five more years, I would read a new manuscript to them each summer vacation around the campfire or snuggled in my tent. It ends this year … the Wycaan Master series that is essentially ours …and probably so much more.

There will be more novels, perhaps another trilogy (are you reading this, Tourmaline Books?), but there will be new characters and if I stay true to my sons, then they will be older and darker and all grown up.

7 comments on “The Hobbit: End of a Father’s Era”