Alon Shalev is the author of three social justice themed novels, including The Accidental Activist, A Gardener’s Tale, and Unwanted Heroes. He is the lead writer of the political blog, Left Coast Voices, and never expected to be delving into the world of fantasy.

While on a camping trip with his family in the majestic Northern California Redwoods, his then 11-year-old son, who devours YA fantasy, objected to his father whipping out his laptop and writing. His 8-year-old emphatically agreed. 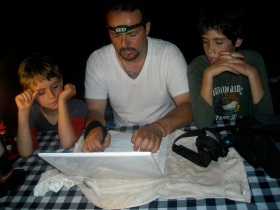 A compromise was reached and the Shalev tribe were soon deeply engrossed in what became the first of six 90,000+ word novels. At The Walls Of Galbrieth reached the Quarter-Finals of the 2012 Amazon Breakthrough Novel Awards (ABNA) and was released by Tourmaline Books in November, 2012. It won the 2013 Eric Hoffer YA Book Award.

Every summer for the next five years, Shalev presented a fresh manuscript to his sons while on their summer vacation, subjecting himself to his harshest critics. In 2015, the family returned to the campsite where it had all began and read the final book, Calhei No More (calhei is elven for children, a dedication to his own growing sons) which was released in 2016.

Written as a Young Adult epic fantasy series, these stories resonate with readers of all ages, telling of a reluctant hero who holds friendship and freedom above power and magic. All books were written for the age level of his oldest son, and many older teens have started reading from the fourth book, Sacrificial Flame.

More about Alon Shalev can be found at his website, along with information about his other novels. He blogs here weekly and tweets @elfwriter

15 comments on “About Alon Shalev (elfwriter)”