How do you explain to someone how to write about a place that you made up? Or a race that has never existed? How to describe the unexplored or give directions to a destination that you have never been to?

Fantasy (and sci-fi) writers are in a unique position in the writing world. A friend of mine is writing a historical novel from the Vietnam War. It is from a time and place that she never experienced. Yet, thorough diligent research and patient interviews, she has built an authentic account of the jungles, the battles, and the actions of soldiers. 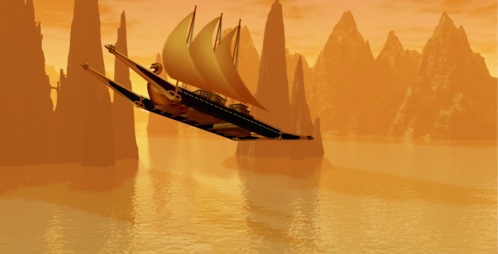 But I have to confess, and let’s just keep this between you and me; I have never met an elf, never yielded high magic or walked and breathed underwater (I tried the latter – it didn’t work). In Wycaan Master, one of my elves performed a particular feat. He will do it several times throughout the three novels and his teacher explains the rudiments to him. Nonetheless one of my dear friends from my writer’s group (not a fantasy writer) proclaimed: “elves can’t do that.”

Our group boasts a number of very smart people, all of whom I am sure, thought what one asked. “Oh really? How many elves do you know?”

We laughed and decided that these were my elves and I could do what I want with them. It was amusing and yet, who sets the rules?

The obvious answer is that the market does, and the market is the reader. Buy a fantasy writer a couple of beers and s/he will admit that we all live in the shadow of the greats, with Tolkien being the greatest of them all.

In the pantheon upon which the great Ring Writer sits, are others held in great esteem. I am devouring Terry Brooks‘ Shannara series, and so I came across a book he wrote to explain his craft.

The book is called: Sometimes The Magic Works – Lessons From A Writing Life. Brooks deals with such issues common to all who write fiction such as plot, characters, hook, dialogue etc., but he also spends time on more specialized aspects such as world creating, or even how it is different perhaps to hold the threads of a plot through a number of books or corresponding paths in a single book.

I read through Sometimes The Magic Works – Lessons From A Writing Life once, enjoying his autobiographical content as much as his craft teaching. I am going away soon for a week and plan to take the book and reread.

I have two questions:

1) What makes writing fantasy different from other genres in terms of craft and technique?

2) Are there other good books on writing that are specific to the fantasy genre?

Drop me a note on the blog or tweet any suggestions. I appreciate your help.

Alon Shalev is the author of The Accidental Activist and A Gardener’s Tale. He has written two fantasy novels and the first has reached the Quarter Finals of  the Amazon Breakthrough Novel Award as of March 2012. More on Alon Shalev at http://www.alonshalev.com/and on Twitter (@elfwriter).

This has been a great week for me professionally. I am concluding a meaningful and moving week with 20 students from our SF Hillel Jewish Student Center, volunteering to help rebuild the Gulf Coast. I have written on this at Left Coast Voices.

It is a totally immersive experience and I have been intensely focused on my students and the New Orleans community. So it is perhaps understandable that I was shocked to receive the electronic reminder that the Amazon Breakthrough Novel Award’s results for the Quarter Finals had been released.

I am immensely proud to advance to the final 250. Wycaan Master has been a tremendous ride since I began writing the novel with my then 11-year-old. He was the first to receive the phone call and the news.

Over the next month the manuscript will be read by Publisher Weekly reviewers. They will grade it and the top 50 move into the semifinals. It is quite a thrilling prospect. So far, over the past year, dozens of goodhearted individuals have read and offered feedback. These people, members of the Berkeley Writers Circle, have been amazing and I have no doubt that Wycaan Master is a much better book because of their input. But they are not professionals and I am rather awed that people from such an established magazine are perusing my novel.

It happened earlier this week in the Financial District of San Francisco. It was a rainy workday and I was sitting in a café editing Wycaan Master, my fantasy novel, when these two beautiful women entered. I’m a guy: I peeked, taking in their tightly, swept back hair, high cheek bones and narrow eyes, all accentuated by carefully applied makeup. They were both tall and thin.

Then I realized. I had been disappointed as my gaze moved to their ears. Their ears were not pointed!

I was shocked. I had really expected pointed ears? It’s this elf thing…it’s taking over. When I am writing a story I am absorbed…totally. Even when editing, I am completely caught up in the story. I can read an emotional scene a dozen times and still be moved to tears (Confession: I once cried during a Simpson’s episode, but that’s for another time).

However more recently I am taken when I see someone who might fit into my fantasy world. A walking stick becomes a staff, and I expect a short, bearded man to have an axe at his side, not an iPhone.

It is taking over.

I’m not the first to stumble down this route. In his excellent book about writing fantasy, Terry Brooks admits to disappearing into the world of Shannara.  Often it happens when he is at the dinner table or with family or friends. His eyes (so he is told) gaze into the distance and everyone understands.

Now Terry Brooks can get away with it for two reasons:

1) He is older and entitled to a senior moment.

2) He is a best-selling author and there is nothing like success to romanticize a little eccentricity.

While I will one day be older, if the gods allow, the success isn’t assured. I am going to have to learn to curb my imagination, to stay in this world until sleep or time in front of a computer allows. A few glasses of single malt can also help.

But I don’t want to block it. My characters are part of my life, their challenges are my problems, and their triumphs are my successes. If I block them out just once, will they come back when I beckon them?

It’s tough living in two separate worlds, but I wouldn’t have it any other way.

Finally, it is St. Patrick’s Day. Did you know the Irish for whiskey is ‘Uisce beatha’, which literally means ‘water of life’?

Alon Shalev is the author of The Accidental Activist and A Gardener’s Tale. He has written two fantasy novels and the first has been entered into the Amazon Breakthrough Novel Award in January 2012. More on Alon Shalev at http://www.alonshalev.com/ and on Twitter (@elfwriter).

Amazon.com sent me list of their best-selling titles (see below). I thought we could springboard on it and see who is reading what. Are you reading any of these novels? What is the best epic fantasy novel that you have read in the last few months?

I am particularly interested in Terry Goodkind. I enjoyed watching Legend of the Seeker on TV, but never got into the Sword of Truth – his first novel. Have you been reading his books? Let me know.

There is a lot of discussion among fantasy writers about the need for the Higher Concept. Can an epic fantasy novel succeed if it is about a young underdog with a magical talent, who needs to overcome the evil (insert whoever)?

True, Tolkien did it, Brooks did it, as have many others. But they are established authors with huge followings. Who will take a chance on the unknown author?

I feel very defensive about this: what about memorable characters, internal conflicts, and plot twists? How about strong dialogue and a couple of intriguing plot twists?

The question is, whether these key components are enough to allow a manuscript to rise through the slush pile in an agent’s office?

There is no question about why Harry Potter, Percy Jackson or The Hunger Games, all stood out to their respective agents and publishers. But I can’t help wondering whether there isn’t something attractive in the familiar.

I have read eight books in Terry Brook’s Shannara series. I will start the ninth soon. I am not bored as each series offers something different, but the tropes remain similar and still I come back for more.

And while I am in defensive mode: Does Grisham, Patterson, or Steel, offer anything new within their genres with each novel? Romance, mystery, crime: don’t they have their own tropes that figure in book after book.

When people get familiar with a genre, do they not go looking for these tropes? Is it not enough to ensure a strong plot with twists, distinct characters and strong dialogue?

What do you think?