Elwin read his previous collection, The Jack Daniels Sessions to our writers group. His new book – Hard Times – is out and his book launch is at Pegasus bookstore in Berkeley later this week. Elwin has a uniques way of writing, but his voice when reading is amazing. Well worth an evening.

1To the bearer of the sandbag: slide back two steps for every one you gain, because the levee does not give ground easily.

3His life measured in steps of ten, one after the other, then again.

4Behind the rifle aimed at his cheek: a hairy face plastered with three stripes of black hair and his

5Eyes like the heads of rusted nails, lips drawn back from broken teeth.

6The deputy kept as close to him as a brother, his curses swallowed by the storm.

7Or maybe he had lost his voice and moved his mouth in hateful habit. 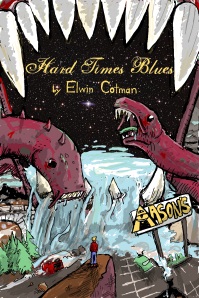 The above excerpt is from “The Revelation of John,” a story in my new collection Hard Times Blues. It deals with the Flood of ’27, when terrible storms devastated the Mississippi delta. Blacks along the Mississippi lost their crops, their livelihoods. They also lost their freedom: black men, like my protagonist, were forced to work the levee in a vain attempt to stop its breaking. Equally as terrifying was the aftermath, when the Army Corps of Engineers abused the blacks who survived. It is a tragic event in US history, and most people I’ve met have never heard of it.

But it is a part of our history. And my genre of choice—fantasy—is the perfect way to explore it.

I write fantasy because it is fun. The inclusion of dragons and elves automatically makes a story more engaging for me. However, my subject matter is often not fun. Even in entertainment, the tragedy of the black experience is inescapable. Nor should it be escaped. It should be dealt with head on so that the world does not forget. The events of Hurricane Katrina becomes especially egregious when people know the same thing happened almost 100 years ago. Past and present are one.

As a kid, I spent my days and nights in Prydain, Narnia, Redwall Abbey, and Krynn. I always felt left out because there were hardly any black characters in these stories. It was when I read Toni Morrison’s Beloved that I saw how fantasy could tell my American story. Here was a horror story, with all the dread and uncertainty that makes good horror. The horror itself stemmed from slavery. The ghost of the dead daughter served to make the story more realistic; a key to learning the degradation of black people.

In my work, I explore historical injustice, police brutality, gentrification. They stem from of a desire to bring these issues to light, but also because they reflect my experience. My world is a multicultural one, and my writing is my truth . . . filtered through dragons and zombies. I once asked Charles de Lint, who some consider the father of urban fantasy, if he ever ran into resistance from publishers for writing black and indigenous characters. His reply was that any publisher who had those reservations wasn’t worth his time.

De Lint is a wonderful fantasist, with stories of fairies and bards that would enchant you. More important, his work is compassionate, addressing the lives of the indigenous, the homeless, the survivors. His writing brings you back to reality.

That’s what fantasy does for me: it brings light to the real world. It also offers the perfect platform for tales of heroism. The Afro-American experience holds numerous stories of rebellion against overwhelming odds. Thanks to fantasy, I have the language to honor this history and heroism.

Elwin  Michael Cotman is a writer of urban and folkloric fantasy. He blogs at www.lookmanoagent.blogspot.com. Hard Times Blues can be ordered on Amazon,com here.