A while ago, I wrote a post about meeting elves in coffee shops. The point was that…well you can read the point for yourself, but there is more along these lines.

I grew up in England with real castles, stately homes, wattle and daub cottages, and signs of a more ancient, Pagan culture everywhere. I was not writing fantasy back then but imagine I would find a lot of inspiration there. Two weeks sitting in a castle in Wales writing – is that a business expense? 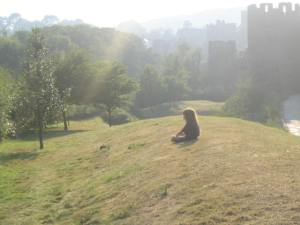 My eldest at Conway Castle, Wales, several years ago. He sat there for hours, transfixed in a world of his own.

But we actually don’t have to travel too far. I attended a conference in the heart of Washington ‘DC Chinatown. I stepped outside the meeting room on the 7th floor  for some fresh air and stared at this:

Today, I was at the Ferry Building in San Francisco and noticed Old Glory flying at half-mast in respect of the victims of the Boston Marathon attack. The sky was a rich blue and the flag and tower looked glorious. I could imagine Seanchai and friends arriving on a boat (do you pay the toll riding over the Bay Bridge on horseback? Do three horses and riders make a posse or qualify for the casual car pool?).

Interestingly, I crossed the Embarcadero between the Ferry Building and Bay Bridge and saw a restaurant with gargoyles and (what looked to me) a sign that could have been written in Medieval lettering. It could have been a tavern or pub for thirsty travelers before they put five Peet’s Coffee and nine Starbucks in the mile-square Financial District.

My point is that writing fantasy is as much a state of mind. When I am actually writing a story (as opposed to editing or marketing), which is about 4-5 months of the year, I notice these things as though they are only around for this time of the year.

Picnic at our local park. Younger son discovered this tunnel. We sat in here and discussed how to use it in the book I was writing at the time.

It is why I see elves in coffee shops and get invited underground by hospitable dwarves. It enriches the already beautiful vistas, forests and rivers of Northern California where I explore. It is what makes my kids and I respond when we see a beautiful natural scene by exclaiming: Alagaesia! (You can blame Christopher Paolini for this. I hope he’s touched).

It is why Terry Brooks claims that ‘Sometimes The Magic Works.‘

Have a mystical weekend.

Alon Shalev writes social justice-themed novels and YA epic fantasy. He swears there is a connection. His latest books include: Unwanted Heroes and At The Walls Of Galbrieth. Alon tweets at @alonshalevsf and @elfwriter.