I am indebted for the story in this post to the author, Peter Smalley – so I want to first give him a shout-out. “Peter A. Smalley was not so much born as he was the object of a suitably ominous origin story.” If you want to know more, click on the link above or check out his latest book – Emerald City Blues.

“I’m glad to be with you, Samwise Gamgee, here at the end of all things.” This is friendship!

So here is the (true) story.

In March 1956, J.R.R. Tolkien was surprised to receive a letter from a man named Sam Gamgee from Tooting, London. Mr. Gamgee, who had not read Lord of the Rings, was surprised to hear that his name had been used in the story. The Professor responded in a letter of his own.

It was very kind of you to write. You can imagine my astonishment when I saw your signature! I can only say, for your comfort, I hope, that the ‘Sam Gamgee’ of my story is a most heroic character, now widely beloved by many readers, even though his origins are rustic. So that perhaps you will not be displeased at the coincidence of the name of this imaginary character of supposedly many centuries ago being the same as yours.” 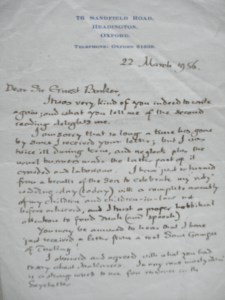 Being the gentleman he was, Tolkien also sent him a signed copy of all three volumes of the book. This incident did, however, worry the professor who wrote in his journal:

“For some time I lived in fear of receiving a letter signed ‘S. Gollum’. That would have been more difficult to deal with.”

Oh well, need to fill the void for the next 1,464 hours (at the time of writing) until the second Hobbit movie!

Finally, thank you to everyone who bought Ashbar – Wycaan Master Bk. 3, which celebrates its 10th day in publication!

Alon Shalev is the author of the 2013 Eric Hoffer YA Book Award winner, At The Walls of Galbrieth, Wycaan Master Book 1 and the sequel The First Decree, both released by Tourmaline Books. Ashbar – Book 3 is the third in the series, released in October 2013. Shalev is also the author of three social justice-themed novels including Unwanted Heroes. He swears there is a connection. More at http://www.alonshalev.com and on Twitter (@elfwriter).