Most people would be daunted at two sixteen-hour flights in the space of two weeks, wondering if they will sleep, whether they have seen all the movies, or what the food will be like. But I have found the perfect solution.

It involves a tablet, a charging station, and already being in the flow of writing your novel. The result was over 10,000 words each way. I never watched a movie, barely touched the food, and only dared the coffee once each trip.

A good pair of headphones helps. Apparently there was a baby in the vicinity and, according to my neighbor’s exasperations, the little tyke was definitely not writing. I’m sure his embattled parents offered a pacifier, milk, and other distractions, but maybe they should have got him on a writing regime before traveling. 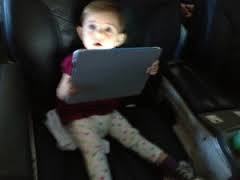 The flight attendants seemed to give me a wide berth because I seemed to miss the drinks all the time. One asked if I was on a work deadline – I think we were the only two awake on the plane at that point – well, I hope the pilots were too – and I was too engrossed to answer any more than a nod. Still, from that point on, she kindly supplied me with water every time she passed.

What was particularly exciting was that I allowed myself to just flow. Usually, I write three chapters from one character and then switch to another. It sets the book in a rhythm and allows me to switch dialogue or action without losing a balance (too much action or dialogue or intensity).

But for this trip, I just wrote from one character’s point-of-view until I had nothing else to write about them for now. Only then did I switch to another thread of the story. And I didn’t stop.

True, back on US soil, I stared at a mass of squiggly red and green lines on my computer screen. There were spelling errors that even I couldn’t identify, and in two places I had to completely rewrite indecipherable paragraphs.

But, at the end of the day and the trip, I was over 20,000 words nearer the end of Wycaan Master Book 5. I got the strangest looks when the pilot announced we were landing and I looked up and wondered aloud: “Already?”

In other news, Thursday was my 50th birthday and waiting in my inbox was Sacrificial Flame – Wycaan Master Book 4, back from the formatters. Only a few weeks to go…

Now, when is my next trip?

Alon Shalev is the author of the 2013 Eric Hoffer YA Book Award winner, At The Walls of Galbrieth (ebook currently at 99 cents), The First Decree, and Ashbar – Wycaan Master Book 3 – all released by Tourmaline Books. Shalev is also the author of three social justice-themed novels including Unwanted Heroes. He swears there is a connection. More at http://www.alonshalev.com and on Twitter (@elfwriter). Hang out with Alon on Google+