I have heard others talk about the difficulty of finishing writing a series, of tying up loose ends, of sad partings and death, glorious battles and victories. However clear your plot line is, it is difficult to turn your back on characters who have walked with you on the paths of fiction for five or ten years.

When I finished the first draft of Book Five during the summer, the plan had been to edit and rewrite and then send out to my editor by the end of October. What actually happened was that I plunged straight into Book 6 and now, three months later, I am writing the final third of the book: the climax and end of the series. My publisher knows that a February launch date is mere fantasy (excuse the pun), but given that they are more used to authors who get writers block and stop writing, my uncontrollable urge to write is hardly seen as much of a disaster. 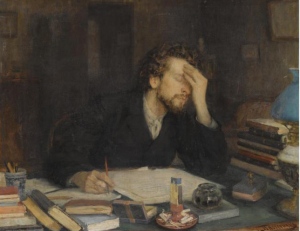 However, I am finding the final third of Book 6 so difficult to write and it is a strange feeling. There are many storylines to tie up and it occurs to me that perhaps it is better to write the sixth book before locking down the fifth.

But beyond anything, and first and foremost is the multiple strands of plot, is the commitment between author and character, and this truly weighs me down. I have written before about killing off characters but even dead they remain part of the story.

I hope to finish the first draft of Book 6 by the end of the year. Thirty thousand words in forty-five days with Thanksgiving and the Christmas holiday season included is not daunting in terms of output. But this time it feels different and a steeper mountain to climb.

I am wondering if other authors feel the same way? The Professor went on after Lord of the Rings to write two more tomes, though George R.R. Martin seems relieved to soon finish. How do you feel, a reader or writer of series’, when you approach the end of an era?

Enough pontificating. another 30,000 words to write!