I believe passionately that writers of fiction  can ply their craft to help effect positive social change and offer a platform for values and principles. The Accidental Activist and A Gardener’s Tale both reflect this and I have a series of books focusing on social issues in the US (all based on San Francisco) beginning with Unwanted Heroes which will be released by Three Clover Press in the spring and highlight the way we treat war veterans and the homeless. 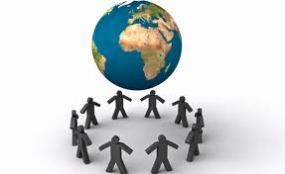 I was delighted when Kaitlyn Cole from Online Universities shared a list that their faculty had put together entitled: 50 Best Novels For Political Junkies.

Kaitlyn wrote: “True story: Some of the best political novels aren’t explicitly about politics. Yes, some of the books on this list deal directly with governments and politicians, with laws and the ways they’re made or abused, and with the peril and promise inherent in every governing body. But some of them use adventure, parable, or satire to subtly explore our political system with a depth that wouldn’t be possible any other way.”

Great point and relevant to those of us who write political fiction. But how about fantasy? Is there room to use our elves and dwarves to promote social injustices or causes?

Over the last two summers I was blessed with the amazing experience of writing two fantasy novels together with my 11-year-old son. While I have read a few fantasy novels, I had no idea about the “rules” of the genre.

Writing with my son, however, compelled me to include moral issues such as racism, dictatorship and freedom, as well as the values of friendship and freedom. I was writing for my son and there are plenty of swords, quests, elves, dwarves etc., but as I watched him read and listened to his feedback, I waited for his comments about such issues and derived huge satisfaction when he brought up issues.

In setting my goals for an exercise at Author Salon, I wrote:

“I have seen the impact of the Harry Potter series and Christopher Paolini’s Inheritance series on my son and his friends. I want to help shape the landscape of the next generation’s imagination and maybe even the society they strive to create.”

My lack of knowledge regarding fantasy leads me to ask the question: Can fantasy offer a vehicle to discuss political and social injustice? I would love to hear your answers fantasy-fans.

Alon Shalev is the author of The Accidental Activist and A Gardener’s Tale. He has written two fantasy novels and the first will enter the Amazon Breakthrough Novel Award in January 2012. More on Alon Shalev at http://www.alonshalev.com/and on Twitter (#elfwriter).

6 comments on “Fantasy as a Vehicle for Social Justice”