I’ve just read two interviews/articles with authors who were negative or detrimental about writers or critique groups. Neither would have fazed me, but having read both at one sitting, well, it irked.

I have facilitated the Berkeley Writer’s Group for more than five years now. There is a core group and a larger transitional crowd who join for a period of time. It is a working group – if you are looking for a social meeting, this is not for you.

Usually, 8-10 individuals will read, receiving 15 minutes to share about 1,200 words (if fiction), or a few poems, article etc. Before they read, they can ask for feedback on a specific aspect and we also write comments on the manuscript copies that they distribute. When they finish reading they shut up and listen unless asked a question (this is the hardest part!). We try to be constructive but honest and there are occasionally bruised egos.

For the past 6 months, I have been reading my YA epic fantasy: Wycaan Master / At the Walls of Galbrieth (I still can’t decide between the two). No one in the group (until a woman recently joined us) were fans of fantasy and, given that they had helped me with two social-justice themed novels, were not happy with my change of direction.

As I near the end of the manuscript, I feel a great appreciation for the group. Certainly, it has not been easy and there are times that I would love to be sharing with people who understand the genre, but there is something incredibly refreshing in their comments, as readers who can look down from 10,000 feet, with perspective.

I recently mentioned that I have changed the teacher figure. He was very much a hybrid of Obi-Wan Kenobi, Brom and Gandalf and my group found him formal and predictable. The agent who is coaching me also commented on this and urged me to turn the character on his head.

He transformed and became a funny and unpredictable woman. She aged, but still had the strength and energy necessary; it just didn’t always come easy. I feel this has had a fundamental impact on my novel, particularly where there is often a middle sag, and added a richer layer, while also distinguishing the book from comparable novels in the genre.

This, and much more, came from people who, while not experts, care about their craft and also about mine. They are not a replacement for the professional editor, but s/he will receive a cleaner manuscript and I will have a richer story.

I often hear from people who speak derogatory about writer’s groups. Usually, they have had a bad experience or two, and so their attitude is understandable. But a good writer’s group is about mutual support, not fluffing or shattering someone’s ego, but it is above all a group communicating in a very honest and artistic way. 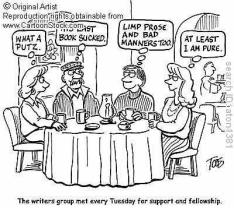 And we do it all face-to-face, with no screen in between. A last bastion of a dying culture?

Alon Shalev is the author of The Accidental Activist and A Gardener’s Tale. He has written two fantasy novels and the first will enter the Amazon Breakthrough Novel Award in January 2012. More on Alon Shalev at http://www.alonshalev.com/and on Twitter (@elfwriter).