Family vacations are always special for my little clan. Once a year, we pack up our considerable collection of camping gear and head to the mountains, lakes and redwoods. Without Internet and electricity, we have no choice but to hike, fish, and enjoy beautiful Northern California and Oregon, and each other. This year there were two highlights. We all followed my eldest’s passion for archery and it has hopefully become a family hobby.

Two years ago. I wrote the first Wycaan Master book together with my eldest son. I have blogged about this previously. Last year, I wrote the second book before we went away and each night, we sat around the campfire or snuggled in my tent as I read to them a few chapters at a time. 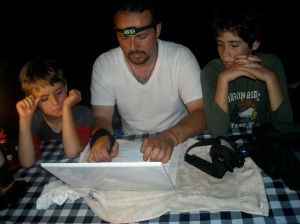 This year, we followed suit, reading the third book of the series. Everyday I waited with anticipation to read and treasured their responses. As the books have become more intricate, my youngest (now 9 years old) sometimes had a hard time following and peppered me with questions, often later that night when he was supposed to sleep, or the next day in the middle of another activity.

Now I know that family are not supposed to be considered as impartial critics. In truth, they had a lot of constructive criticism and suggestions, most of which I adopted. But I cannot imagine enjoying the level of engagement that they experienced and expressed from anyone else.

Back in the Bay Area and it is time to make major decisions. There is time as I outsource the books for some professional editing, but I am considering alternative options to publish the series.

A fascinating conversation with a representative at a publishing house with a long history of epic fantasy titles has left me wondering how long to walk the traditional path. She told me that they spent considerable time discussing the option of signing me even though they had previously made a business decision to stop publishing in this genre. It just doesn’t make business sense in the current economic climate, she told me. It has nothing to do with the quality of your work.

I feel a degree of frustration as I have been watching other fantasy authors and their respectable and consistent ranking on Amazon.com. Daniel Arenson, who is the author of the Requiem series and others, announced the following at the end of June: 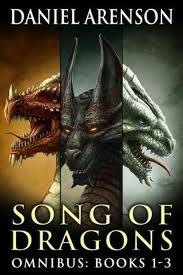 I have no doubt that Mr. Arenson worked extremely hard to get to this significant landmark. He wrote great books and went out and did it by himself.

Alon Shalev is the author of The Accidental Activist and A Gardener’s Tale. He has written three epic fantasy novels and the first reached the Quarter Finals of  the Amazon Breakthrough Novel Award as of March 2012. More on Alon Shalev at http://www.alonshalev.com/ and on Twitter (@elfwriter).