Busy weekend, so I am plagiarizing dark fantasy author Andy Peloquin who has sent out an urgent message. One of my greatest fears is whether I can provide for my family should something happen to me.

Brandon Barr has been fighting cancer off and on for nearly a decade. He’s gone into remission twice, but you’d never know that he’s been fighting for his life. He’s such a cheerful, upbeat, positive person–he’s brought joy to those of us privileged to know him.

But now, after multiple bone marrow transplants, his leukemia has returned. He’s done everything he can, yet the time has come: soon, the world will lose a good man.

I’ve never met him personally, but I’ve interacted with him online, worked with him, and seen the many people his writing, his skill, and his genuinely decent personality have touched.

But the loss will be much harder for others: his devoted wife Amanda will lose her loving husband, and three young boys will lose their hero, their rock, their father.

You may not know him personally, but you can help:

1. Buying a copy of his new launch: I’ve already got mine and once I get through my current read, I’ll dig into it and post a review to my blog/website to try and get more people to read it.

3. Donate to his GoFundMe page. I’ve already donated (anonymously–it’s not about me), along with most of my fellow author friends.

I know it’s a lot to ask–you don’t know Brandon, and likely you’re living on as tight a budget as the rest of us. If you don’t feel up to it, send positive thoughts or prayers his way, and for his family. But if you can spare anything–even just a dollar or two–it will make a huge difference for his family.

Every dollar you can part with is a little drop of peace you can give Brandon right now as he faces this greatest of challenges. Go to Brandon’s GoFundMePage here.

Thank you, from the bottom of my heart! I know that if it was me, I’d be terribly worried for the future of my family, so knowing that there are genuinely good people out there willing to help can make a huge difference in Brandon’s final days.

May God, Allah, Yahweh, Gaia, the Universe, karma, or whatever higher power you believe in reward you a thousandfold!

Alon again: just downloaded my copy and went to Brandon’s GoFundMePage. In Jewish tradition, the number 18 signifies the Hebrew letters for chai – life. If you can, please donate $18 or whatever works for you.

Thank you for reading a difficult post in difficult times.

Alon Shalev is the author of the 2013 Eric Hoffer YA Book Award winner, At The Walls Of Galbrieth, and five other Wycaan Master books all released by Tourmaline Books. Sign up for more information about Alon Shalev at his author website. 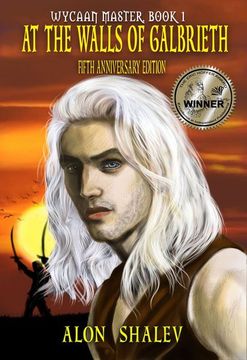 A common question that I field at readings is how/why I chose the name of a particular character? I find it surprising because I would never have thought to ask such a question of my favorite authors. Either I considered their names a perfect fit  (and so never thought about it), or the author probably didn’t remain my favorite for long.

But it is a good question. A name, particularly for a protagonist or main character, is a significant part of the experience. If it appears ten times on every page and gets stuck in your throat, it is either a big problem or you need some lozenges on hand.  And if we are talking about a series, then that character is going to be around for some time.

R.A.Salvatore, one of my role models and favorite authors, challenges us with his drows.

With the fourth Wycaan Master novel safely ensconced in the hands of my editor, I did what every author without a life or with a compulsive disorder does and began Book 5. My dear friends, Seanchai, Rhoddan and Sellia, have appeared in every book, so we are closing in on a half million words by the time I finish this one. I am trying to restrain myself from discovering how many times each name has appeared.

Having attended a number of events with people who have actually read my novels (they exist!), I discovered that everyone pronounces Seanchai differently. I am particularly proud of his name and love being asked why I chose it. In Celtic culture, a Seanchai was a traditional storyteller and, in my books, the Wycaan magic that our protagonist learns is based upon words and stories.

While providing what I hope is a cool answer, I see in their expressions how it is difficult that people struggle to say or hear. I am, of course, the worst offender. My non-existent Celtic notwithstanding, I have spend a good part of my life in the Middle East, where we sound like we are clearing our throats every time we put a ch together. It can be unsettling at first, because you flinch thinking the person is about to spit on you. but a serious ch is essential to the language and I worked very hard to master it.

More locally, I discovered people use che as in the name of the Cuban revolutionary. At a recent event, two friends decided to help me with a more interactive reading, each taking different parts, and each inevitably pronouncing Seanchai differently. We had a blast, but I wonder how those in the audience who had not read any of the series coped.

I guess it doesn’t really matter until the movie comes out right? And by that time, pronouncing his name will be the last thing on this elated author’s mind. Slightly more realistically, I would love to produce an audio book since I derive such pleasure from them on my long, daily commute.

Ironically, I have no idea where the name Rhoddan came from, I really don’t. I was looking for something that suggested stability and loyalty – go figure – but I feel the name fits perfectly. Certainly, the upside is that everyone agrees on how to pronounce his name, so hey, he can stay alive…for now!

The Greeks deserve credit for conveying much about their characters through names. Zeus is truly a name fit for a god and the king of the gods at that. And how would you react if your daughter told you that she was dating a dude named Hades or Loki? Lock her in her room, I’m sure. Thor sounds like a badass, and Aphrodite – well, best I leave that to your own imagination.

Moving to our own gods, and I think the old professor did a pretty good job all round, particularly with his hobbits. Bilbo Baggins is already lovable and you have only seen his business card. Friendly, courteous, and clearly one who drinks tea, eats Second Breakfast, and has a clean handkerchief in his pocketsss along with, of course, a ring of apocalyptic power. Who doesn’t these days?

Tolkien did so well naming his hobbits – see this awesome list – and he nailed it with Gollum. If a name conveys considerable information, we understand that this is one twisted fella, with a name that just sticks in your throat.

Ilana, since you ask, comes from the Hebrew for tree. I chose this quite deliberately as I was looking for something stable, beautiful, and important to the existence of the characters around her. Alon means oak in Hebrew, so you see I have an affinity with trees, and At The Walls Of Galbrieth was conceived in a beautiful ancient redwood forest.

The names of minor characters is also important as an author spends more limited time extrapolating their characteristics. Since they appear and disappear so often, you want these names to be remembered and to also convey something about the characters. Certainly, when you have over a thousand characters stretching over several hefty tomes, yes I’m talking about you, Mr Martin, this becomes especially challenging.

There is an advantage when reading ebooks, that you can search back to find references to a character, but this is impossible in an audiobook, and while a glossary of characters is helpful to flick through in most circumstances, it is not recommended while driving and listening to the audio book. App anyone?

What is your favorite name for an epic fantasy character? Which author shines at their selection? And which character does not fit the image you imagined from the name?