Pass a summer evening in a quaint English pub, mid 20th century, perhaps in the old town of Oxford. Caress a pint and listening to a few graying professors discuss semantics, philosophy, and the ancient languages long forgotten outside the sheltered walls of academia. What else can one possibly ask for? 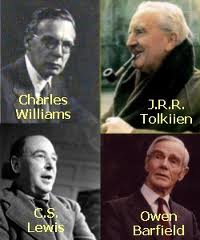 Imagine these tweed-clad, pipe-smoking academics, hatching more than another challenging semester to try the greatest minds of this fair isle. Each is a king in the making or, more accurately, a kingmaker. For they direct more than the destiny of kings and noble houses. They raise kingdoms and conquer lands. They build great dynasties, bring whole species back from the mists of extinction, and set those of noble birth and principle to stand against evil.

Sip your beer, mull over the words, much of which you might not understand. Dwarves, elves, of course: but hobbits? Marsh-wiggles? Listen as the professors strategize great battles, masterfully marshalling unicorns, dragons, giants, minotaurs and proud ents.

You slowly realize that you sit among the Gods, the creators of Middle Earth and Narnia, who hold court on Tuesdays at midday in a local public house. Perhaps it is The Eagle and Child, or The Lamb and Flag across the street. They read each other’s work and offer critique as writer’s groups have for centuries and continue to do so today.

I may never have understood much or been accepted into such an elite. They would have torn my work to shreds on grounds of philological shallowness (I had it checked – it’s not contagious), criticized me for imprudently suggesting that a 100,000 word novel can serve as more than merely an introduction.

They would have demanded richer world-building – take twenty pages to describe a forest, I dare you – unyielding heroes, and infallible plots. They would have challenged the age-old legends dressed up in fictional costumes, and raised an eyebrow at some of the language or innuendos.

Most likely, I would never have dared reveal my stories to the old professors of Oxford, to the most famous writing group in history. I would never have been more than a fly on the wall at a meeting of The Inklings, but would have returned week after week to sit at the feet of the Gods and hear their banter.

For here the Gods gave birth to great worlds and left them as a legacy to us and to our children, long after they departed this world. Every Wednesday night, I sit around a table in a coffee shop in Berkeley, sharing work with other aspiring authors and wonder: do the Gods look down upon us from Writers Heaven? 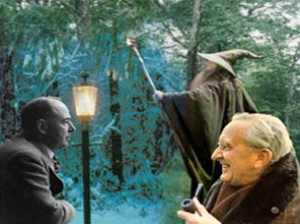 Do they tut and shake their heads at our adverb addiction, our unwillingness to kill our darlings? Or do they even now move pieces around the literary chessboard. Protect the king! Advance the knights! Who, I wonder, are the pawns?

As we write a new book, a new chapter, do we not imagine the Gods walk among us?  Do they peer over our shoulders at our swanky writing machines, judging every word we write, every world we build?

The Gods once sat in an old English pub. Now they stand behind us in coffee shops and at kitchen tables, urging us on, watching us walk the path they forged, taking on the quest they started.

For the Gods still walk among us and inside of us. The stories have been told but must be told again in different ways to a different generation. We sign these books in our own names, but humbly acknowledge those who molded us in their image as storytellers.

And now they are the flys on the wall and we who pound the keyboards. Take a moment, draw another pint, and raise your glass:

To the Gods of Fantasy!