I did. It’s true. In front of a critical audience, I broke down. To their credit, they smiled indulgently. Not really. Both my sons in fact grinned at my embarrassment as, with the summer closing, I read the last page of the first draft. I have, for five consecutive summers, read the words The End. Now, as I read the closing words of Book 6, it hit me: this really was the end. Each time in the past they would sigh, grumble that it’s over, but know that next summer…

This is how it all began – deep in a redwood forest.

This time, The End was The End. Some character died, others survived, but all moved on. This time I did not weep for my characters (I have many times). I did not weep for my sons (let’s not go there). Truth is, I wept for myself. My boys are six years older than when we started, almost men, and all I can hope for is that one day maybe they will tell their children how their grandfather wrote epic novels for them, one every summer.

As I reached the bottom of the epilogue, I could no longer articulate. So I turned to Ms. Elfwriter and pointed to the last line. She read it with the gravity I felt, with total solemnity. 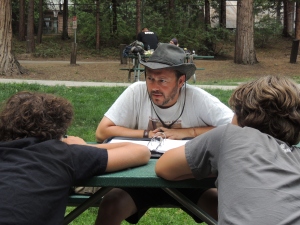 Now it is over. I have nothing to consider for six months or so, as I tear Book 6 apart and rewrite, rewrite, rewrite. I imagine around the end of the year or beginning of next, I will send it off to the publishers and…

But there is time to pass. On the same day I read the end of Book 6, I received the proof copies of From Ashes They Rose. Hopefully we are still on schedule for October 1.

We are definitely on schedule for the release of the eBook. As I wrote last week:

…the process of preorder is huge for the author. If many of one’s followers preorder the new release, the purchase will count on the launch day. This means a high sales rank, potential best selling status, and encourages other readers and Amazon itself to take notice.

So please, consider investing $2.99 sometime this month to preorder the ebook version of From Ashes They Rose. Maybe one day you can point out nonchalantly to friends over a deep red Merlot that you helped that best selling author when he was still a struggling writer. 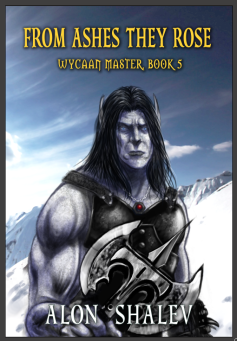 Alon Shalev is the author of the 2013 Eric Hoffer YA Book Award winner, At The Walls of Galbrieth, and four more novels in the Wycaan Master Series – all released by Tourmaline Books. From Ashes They Rose the fifth in the series, will be released October 1, 2015. The story continues.

3 comments on “I Bawled My Eyes Out”