To celebrate Hobbit Day tomorrow (the birthdays of both Bilbo and Frodo), I would like to share a post I wrote two years ago after the first Hobbit movie came out. There is so much depth in the Hobbits’ simple characters, especially in relation to the others around them – wizards, kings, princes, elf lords etc., that it is an amazing tribute to Tolkien how he weaved these unassuming and lovable creatures into our psyches. This was my tribute to the old professor after the movie.

THERE ARE NO SPOILERS ABOUT THE MOVIE IN THIS POST.

Last week I blogged about my expectation that a new generation were about to embark on an unexpected journey into the world of epic fantasy as they sat and watched the first Hobbit movie.

I mentioned with pride how my teenage son, moving into social independence, chose to see the movie with me rather than his friends. My first fantasy novel (and the three others to a lesser extent), At The Walls Of Galbrieth, was a joint project, and I identify our mutual love for the genre as one more log to grab as he flows down the river of manhood.

We sat next to each other and whispered and compared experiences. It was everything a father could hope for.

But it was with my youngest son (10 years old) with whom I had an unexpected experience. I wish to thank the movie theatre for failing to fix the armrest between us (why does this never happen on a date?). We were able to push it up and out of the way and for three hours, we cuddled together as we watched the movie.

While my older son leaned over and whispered whenever he wanted to, I could actually feel my youngest son’s reaction by his body language. I was intrigued. I felt when he tensed, when he was amazed, when he was sad, and when he laughed.

Other people – I didn’t think my fellow movie-goers would appreciate the camera flash in the middle of the movie!

As we made our way home after the movie, my youngest enthusiastically told me about how we should incorporate this or that into the fourth Wycaan Master novel. I think the Tolkien Estate might sue if we did what he was suggesting, but for the moment, I just basked in his enthusiasm.

Another epic fantasy lover. I’m not the greatest father, I know. But this evening I felt I had done my job.

Finally a shout out to Stephen Colbert. Depending on your politics, you may or may not enjoy his nightly show. But he is undoubtedly impressive with his ability to be satirical and hold his own with very high-level guests.

But he outdid himself with a week of tribute to The Hobbit. Turns out, Mr. Colbert is a major Tolkien fan. His elfish sounds polished, and his knowledge of The Professor’s work is awesome. 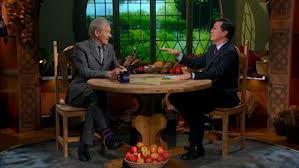 Check him out on You Tube – he has a different cast member as guest each night.