It was always going to feel strange: the excitement of a new novel being launched together with the knowledge that this is the end of the Wycaan Master series. But somehow, it feels even more surreal than I had anticipated. 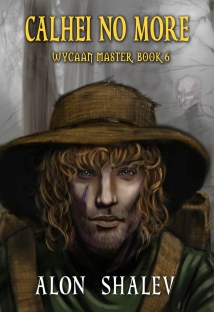 My knee accident and operation along with the subsequent rehab was obviously never anticipated, and I thank all of you for your wonderful healing wishes. I am an active, sports-loving man, and have no idea how to sit around and wait for seven pieces of my knee bone (patella) to slowly reconnect. In desperation, my wonderful staff at AJWS bought me a two months’ subscription to Netflix and had to explain to me what binge watching is and why it is especially okay in my situation.

Still it is hard not to feel guilty if I’m not working hard for those who pay me a salary or if I am not busy writing a next novel, editing the latest manuscript, and in this case, promoting the launch of Calhei No More which is next Tuesday.

Next Tuesday! At The Walls of Galbrieth was written in 2010. Seanchai, Rhoddan, Ilana, Sellia and Shayth have been in my life for six years now. I have laughed with them, cried, feared for their future, and between us, got quite annoyed at some of their decisions.

I watched an episode of Westworld yesterday (cable, not Netflix), in which a character said being a parent is about knowing when to let go. I’m dealing with this as a parent of teenage boys – I would rather they remain young enough to snuggle in our tent in a redwood forest as I read another manuscript to and for them – but now I realize I need to step back as well with the Wycaan Master characters.

Westworld, without giving anything away (and I have barely began to watch), is about artificial intelligence. A theme park has been created and people pay to interact with the very real robots (hosts), but the really fascinating part is the relationships that seem to surface between the team who created, maintain, and upgrade the hosts, and the robots themselves.

It seems impossible not to get attached to the characters of a book much less a series where you created the character and have helped it evolve and grow. When I killed off a major character early in the series I cried. I didn’t, at the time, think it particularly strange to shed a few tears, but crying each of the 20+ times I edited and rewrote the scene and subsequent consequences borders on the traumatic…for me, the author (many of you made it very clear how you felt too…!).

I believe the relationship between character and creator is sacred in as much as it is unique. Those of you with a more religious perspective might connect this to the Creator and humanity, which brings us to the question: is being an author a vain attempt to play at being a deity? Let’s leave that for another time.

But I never expected to care and agonise so much for the characters I created throughout the series, and it feels as though I’m failing as a father when Calhei No More launches next week, when I finally let go of my creative offspring and close the last page.

Whatever my feelings, Calhei No More will be released and you can pre-order the e-book here. The page for the paperback will be here, but I’m not sure when it goes live (usually a few days before launch to iron out any issues). Pre-ordering will bring attention on Launch Day and tempt Amazon.com to help promote more – so it is a big help to me.

Thank you again for all your good wishes and for your support of the Wycaan Master series. Do remember, I love hearing feedback and really appreciate any reviews you can write on Amazon for any of the novels.

Until November 15… For better or worse, it all ends on the Plains of Shindellia. See you there.