Research is important for the authenticity of a novel, right? But with six epic fantasy novels published and having written about half a million words in 3.75 manuscripts of a medieval fantasy series, it was a bit embarrassing to get so blatantly caught out.

While my Kingfisher series (looking for an agent, btw) is based on a fantasy land, it looks, feels and sounds like England. Born into a craftsman family in London (at the north end of the Underground’s Northern Line – does that give me “The North Remembers” bragging rights? – I figure I’m allowed. I can wield the olde language better than a lance, and read out loud to my writers group in the olde tongue (or at least the olde accent).

There I was reading about my characters digging into a feast of lamb stew and potatoes, when someone piped up that potatoes didn’t exist in England or indeed Europe until after the discovery of the new world. I protested. “What about Ireland?” I mumbled . I should have known better, arguing with a historian who writes excellent gold rush novels and has us salivating every time his heroes stop to eat.

Now, having written for most of the six-hour flight to Toronto and hearing my connection is delayed, I thought to burn some time doing actual research. So here it is:

The peasants ate cabbage, beans, eggs, oats and brown bread. Occasionally, there was cheese, bacon and chickens. If you lived near water, fish would feature prominently, whether freshwater or sea. The fish could be dried, salted or smoked, which enabled them to be kept for the winter or for trips.

They might have milk from sheep and goats, but cows were not popular because the milk went off quickly. Herbs, roots, nuts, and edible flowers garnished the plate.

Actually, not the plate. They didn’t use them. Many carried their own bowls and spoons, and often used a loaf of bread with the middle torn out – a trencher. Nor did they use cutlery or artificial sweeteners. Honey was plentiful and used to sweeten and to make medicinal herbal concoctions drinkable.

The wealthy apparently did not eat their greens, having more access to livestock and the bounties of hunting – pheasants and deer, for example. Interestingly, they used spices heavily to create thick, rich sauces. They also refined flour making white bread a delicacy.

Ale and beer were available to all, but wine was only for the upper classes, as it was imported from Italy, Spain, and France

There are actually a plethora of websites that give far more detail, including this excellent one. But the most entertaining by far was this 2-minute video from Mama Natural. Well worth it!

Oh well. Guess I will have to scrap my sequel – Knights of the Golden Arches! – They were going to take over the world through real estate acquisition, cut down the ancient forests for grazing, pay their serfs  minimum wage, and destroy their enemies by encouraging them to become obese and have high cholesterol.

Admit it, you were hooked!

Alon Shalev is the author of the 2013 Eric Hoffer YA Book Award winner, At The Walls Of Galbrieth (ebook currently at 99c) and five other Wycaan Master books all released by Tourmaline Books and available in KU. Sign up for more information about Alon Shalev at his author website.

I belong to a wonderfully supportive writer’s group where, over the years, we have struck a balance between supporting each other and offering constructive criticism to help each other improve our craft and our manuscripts. It is a multi-genre group, primarily fiction, but with poets and non-fiction.

This week, John Putnam, one of our most successful authors, who has written several historical Western novels about the Gold Rush, explained how having taken our prior comments into account, is keeping a specific action scene. He had given it some thought and decided that it aligns with his target audience. None of us generally read Western novels and I admire how he has stuck to his guns (probably Colt 45’s or a trusty Winchester!) and, while considering our advice, has stayed focused on what his readers want and expect.

At the same meeting, a wonderful colleague mentioned how she thought some of my female characters in Kingfisher: Slave to Honor were too dark for her taste. It is a fair point and I am wondering about balancing her feedback with the fact that this manuscript is meant for a Grimdark / adult Medieval Fantasy audience (think Joe Abercrombie, Brent Weeks, George R.R. Martin).

The concept of Write-to-Market is to know who your target audience – your readers – are and what they expect. Your mother might not like it even though she still claims you’re the greatest author ever, but then she does not buy other novels in your genre.

I listen to many podcasts, read marketing books and articles, hopefully by successful authors as I try to fathom my way through the ever-changing tools available to market the Wycaan Master series. A commonality among these authors is the need to write for those who read your books. It sounds simple, but I’ve lost count of writers who have assured me that everyone would love their novel – and I ran a writer’s marketing group for years for the California Writers Club and spoken to various forums on the topic.

It is incumbent to understand who are reading your genre, where they hang out, and what they want. How do we find that out? Here are a couple of ideas:

I hope this blog post has inspired you to focus on your target audience and take the time to research before you invest time and money in certain marketing tactics. It has helped me. I am planning a survey of Grimdark / adult Medieval Fantasy readers. If you’re a member of the tribe, I hope you’ll participate.

More on the author can be found at his website and you can sign up for his quarterly eNewsletter here.

Last week, Amazon announced the dates for the Amazon Breakthrough Novel Awards 2014 (ABNA). This was the signal, across the country, that sent thousands of writers, novelists, and dreamers, scurrying into our offices, corners, coffee shops, and wherever else people of our ilk perch to write their novels.

Ten thousand will be allowed to enter a novel, an excerpt and a pitch, click on submit, and then lean back to spend three months dreaming of future fame and glory. It is the writer’s lottery ticket and the adrenaline is flowing.

Part of the magic around this competition is that it is the ultimate democratizing of publishing. All who enter receive equal access to the judges, the fans, and the agents who hover on the periphery. No more ambushing agents in expensive Writer Conference bathrooms (yes it happens), no more trips to the post office with unsolicited manuscripts, no more trying to convince a friend who knows someone who knows…

Click on the button and let cyber-nature take its course. If your manuscript is intriguing, your pitch compelling, and your craft sound, you stand as good a chance as the other 9,999 entries. Personally, I prepared my acceptance speech, good for ABNA, Nobel, the Oscars or Oprah! 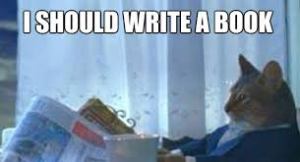 And then there is ABNA Anonymous (not its real name – see Createspace website), a glorious plethora of online forums wherein the hopeful gather to ask questions, hypothesize, vent frustrations, and enjoy a communal glass of wine without needing to drive home.

I have entered two novels that both reached the Quarter Finals, the last 250 contestants.  Whilst the semi finals proved elusive, Unwanted Heroes was picked up by Three Clover Press, and At The Walls Of Galbrieth went on to win the 2013 Eric Hoffer Book Award for YA.

A good friend, Francine Howard, also reached the Quarter Finals with Pages of a Tennessee Journal and went on to become an Amazon Encore author, signed up by Amazon’s own publishing house. The link also has a lovely interview with Francine further down the page.

So here’s to another successful year for the Amazon Breakthrough Novel Award and all those who bravely enter. Reaching the final destination would be nice, but the journey is a great ride. Enjoy it!

Now, if you will excuse me, I have a pitch to polish!